Rocco John Iacovone plays hard-edged alto and soprano with more than a touch of Coltrane. Throughout, the focus and interconnectivity... is laser sharp.
jazzchicago.net Review by Brad Walseth February 2009

One of the most amazing discoveries I have made in the last few years has been Rocco John Iacovone. Saxophonist, bandleader of his self-titled group, educator, and student of jazz masters, Rocco John is a musician deserving much wider recognition.
KIOS  91.5 Omaha public radio Çhris Cooke

Just like his hero, (Dolphy) Iacovone's alto plays both inside and outside the chord changes, glides across registers, plays urgent short phrases and repeats notes for emphasis, without overdoing any of it.
Jazz.com  reviewer: S. Victor Aaron 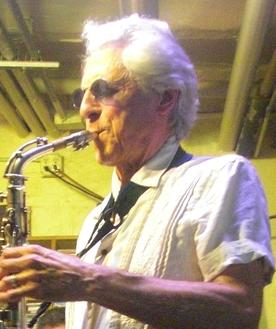 By TROY DOSTERT
Rocco John Iacovone has been an under-sung presence in the New York avant-garde scene for some time. Despite several recordings to his name, he's yet to get much big-time recognition. But with this live recording by his octet, the Improvisational Composers Ensemble, that could change. The December 2014 performance at John Zorn's club, the Stone had been arranged as part of a week-long residency curated by Will Connell, another under-acknowledged performer who in the 1960s was involved with Horace Tapscott's Los Angeles- based Black Arts Movement before coming to New York in the 1970s. Connell, a multi-instrumentalist known especially for his work on alto saxophone and bass clarinet, had recently been playing the latter in Iacovone's octet. Sadly, however, Connell died soon before the Stone performance, which turned the occasion into a somber affair. Even so, the resulting music is ultimately celebratory and joyous, and it's a more-than-fitting homage to Connell's life and legacy.
Iacovone wrote all three of the pieces on the record, and they're perfect in providing just enough structure to allow the musicians to dig in and explore their possibilities, both as soloists and in conversation with other members of the group. Case in point is the record's opener, "Aurora Borealis," built around a repeated descending scale that eventually settles into a relaxed groove, anchored skillfully by bassist Philip Sirois and drummer Dalius Naujo, that allows room for Ras Moshe Burnett to develop a torrid tenor solo before handing the baton to other members of the group. Although at over 23 minutes the piece is of substantial length, Iacovone makes good use of different combinations of the band members to keep the music interesting. Violinist Sana Nagano's dynamic exchange with Iacovone (on alto) midway through the piece is a particular highlight. Their fiery interplay is exciting and infectious, and when Burnett then joins in to provide a two-horn onslaught, they take the music to another level altogether.
The other pieces, "Evolutions" and "What If the Moon Were Made Out of Jazz" are similarly potent in combining Iacovone's compositional vision with the individual talents of the group's members. Naujo possesses a huge sound on drums, with the rhythmic fluidity needed to keep the music moving and to navigate between backing the soloists and guiding the group through the ensemble passages. A melancholy minor-key melody serves as the core of "Evolutions," although with feisty solo statements by Nagano and bass clarinetist Michael Lytle, and another incendiary pairing of Iacovone and Burnett (this time on flute), the piece retains a defiant intensity throughout. Finally, "What If the Moon..." closes the record with another would-be mournful melodic theme that soon comes to life dramatically as the band surges over the top of Naujo's propulsive drumwork. Iacovone seems especially inspired here, bringing every ounce of strength he has, both on alto and piano, and the group's impassioned tumult as the piece nears its conclusion leaves no doubt that the music will avoid sentimentality as it pays a powerful tribute to their friend and colleague.
With a terrific group of musicians worthy of wider acclaim in their own right, Iacovone has admirably made the best of a regrettable set of circumstances. And at the same time, this music will assuredly help to secure Connell's legacy in a memorable fashion.
Track Listing: Aurora Borealis; Evolutions; What If the Moon Were Made Out of Jazz.
Personnel: Rocco John Iacovone: alto and soprano saxophones, piano; Ras Moshe Burnett: bells, tenor saxophone, flute; Sana Nagano: violin; Michael Lytle: bass clarinet; Rich Rosenthal: guitar; Phil Sirois: double-bass; John Pietaro: percussion; Dalius Naujo: drums.
Year Released: 2017 | Record Label: Unseen Rain Records

What’s not to like about a fine quartet of superb but under-appreciated players working that sweet spot between post-bop and the outside? The date opens up with a nice tasty drum spotlight, followed by the leader’s fulsome alto lines, both fleet and tart. In time, they cede the spotlight to the excellent Grillot and Rosenthal, whose clean tone and buzzing lines I really dug, not least because they make for an excellent con- trast with Iacovone throughout. Some vigorous, bustling post-bop ensues on the exuberant “Escape,” whose lop- ing unisons move through a nice series of overlapping lines, bobbing up and back, with slight intensities well- ing up here and there. The further one gets in listening to this group, it’s not too unlike one of Joe Morris/Rob Brown’s more inside dates, at least in terms of the com- positional/structural approach; the actual instrumental languages differ, as is obvious on the stair-stepping “Circuits,” where Rosenthal’s nimble, inventive playing brings some serious energy. He and Iacovone romp on the funky, shuffling “Dial Up” and are equally impressive on the abstract, balladic “Tango” (which only hints at its musical inspiration). “Whispers” meanders just a bit to my ears, though it’s certainly filled with nimble playing and excellent instrumental interaction – perhaps just not enough thematic meat for what these guys are try- ing to accomplish. Things are very much back on track with “72s,” where the fabulous work from Grillot and Cabrera sets up some of the record’s finest improvising from the leader and the guitarist. Closed out by a nice, mid-tempo second version of “Wings,” it’s a strong date overall.

Altoist Rocco John is a fixture on the New York scene, keeping the new new thing free flames stoked with his own brand of avant jazz. He records more infrequently than I would like, but then that makes his new releases all the more welcome.
His latest, Embrace the Change (Unseen Rain 9947), features a cohesive and compatible quartet of Rocco John on alto and soprano, Rich Rosenthal on electric guitar, Francois Grillot on contrabass and Tom Cabrera on drums. Rocco John provides the originals, attractive springboards for the often collective improvisations that make good tracks into the horizon.

Rocco John sounds quite limber and full of spontaneous musicality. So too Rich makes creative paths that go well with what Rocco John is doing. Francois Grillot is, as always, the complete bassist, whether walking or making horn-like statements. And Tom Cabrera swings and frees it all up well depending on what is needed.
It is an album that stays in the avant mode with lots of fire and ideas. It's well worth hearing, another notch in the Rocco musical belt. Recommended!